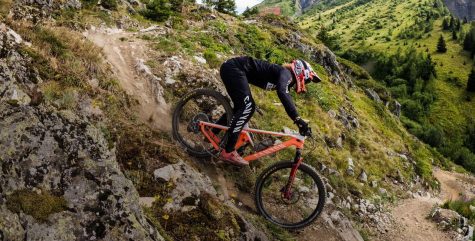 Everyone’s heard of school sports like soccer, and basketball. But not everyone has heard of mountain biking. Mountain biking is a growing sport around Davis High and other schools in Utah. This makes sense because there are lots of awesome trails in the mountains around here.

The Mountain bike team is a friendly environment for everyone. Anyone can join with just a fee. It is a great way to meet new people and progress your skills as a mountain biker.

The mountain bike team does lots of practices to get ready for the races. There are four races in a season and then there is the state race for the fastest kids that qualify.

When he says early mornings up Farmington canyon he is talking about practices where the team goes and rides up the canyon. It is up hill for several miles so it really helps riders build strength and endurance for the races.

“I was able to accomplish 4th place overall…,” Said Raymond when asked what he had accomplished this season. 4th place overall means that in his racing category, he got 4th place at the end of the season. That is very good considering some races have 90 people in them.

Races are at different locations around Utah. This year, some races were at Beaver Canyon, Eagle mountain, Powder Mountain, and Snow Basin. The state race took place in St. George in southern Utah.

When Spencer Swain was asked about his experiences at the state race he said, “I had a really good time and it was fun to race against the fastest riders in the state. It really pushed me to be a better rider and I’m glad I was able to go.”

Joining the Davis High Mountain Bike Team is something that more people should consider because it is a great program that is super cool.